The history of Fatima is related to the appearance of Virgin Mary on May 13th, 1917. On this day three children, Lucia Santos, Jacinta Marta and Francesco, saw a female appearance. She told them to come back to this place for the next five months. Eventually 70,000 pilgrims gathered on October 13th. Only one of the children, Lucia, was told the secret of Fatima at the last appearance of Mary. The secret was in three parts: a vision of hell, a vision of war and the murder of a pope. Two of the children (Jacinta and Francesco) died young and were canonized by Pope John Paul II and buried in the basilica. Lucia died in 2005 and was also buried in the basilica in 2006. Fatima is a famous place of pilgrimage, this place is called the altar of the world. On the edge of the square the neo-baroque basilica. 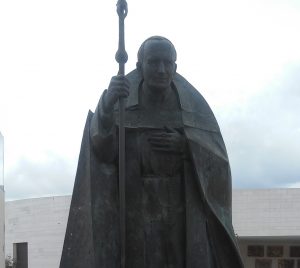 The square, twice the size of St. Peter’s Square in Rome, is visited by thousands of pilgrims in May and October, they commemorate the appearance of Mary. During midnight service, thousands of candles illuminate the square, and in the last service the statue of Mary is waved goodby with white handkerchiefs.

Lighting a candle is already an experience.